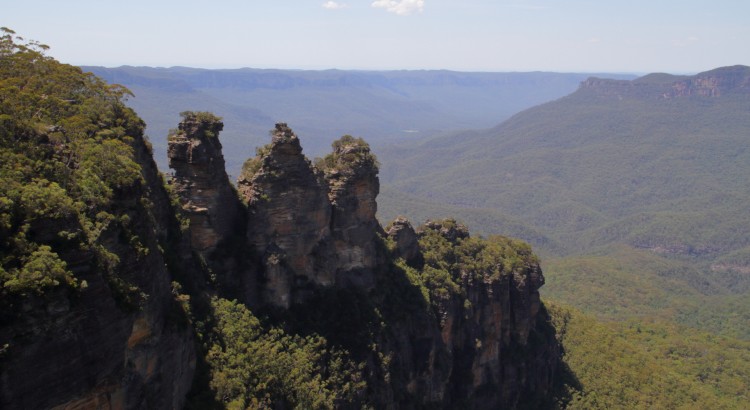 So we’ve finally returned to New South Wales. Our first trip into the state was a quick jaunt down from Brisbane to Byron Bay; this time we’ll get to spend a little more time here. On our first trip Nicola managed to get herself breathalised, however this season’s trend for the police is speeding. It seemed every 100km we’d pass a Police Officer with a speedgun intent on jumping in his car for a race. We had to really push the throttle to prevent them to catching up with us as we headed South.

Having already covered Surfer’s Paradise during our early road trip out of Brisbane we decided to head straight down to Byron Bay to pick up where our earlier travels left off. Byron Bay didn’t really grab me the first time and this time was no different. Aside from a rather nice campsite (Glen Villa) and a great Mexican (Miss Margarita), which we visited again for dinner, there’s not much I would recommend as a “must see”.

The next morning we headed up to the lighthouse, which we had visited during our first stay; where we managed to spot lots of dolphins and whales. Being out of whale season we weren’t particularly expectant to see any marine life in the bay but fortunately enough for us we spotted a large pod of dolphins after we had completed the walk down from the light house to the point and made it almost all the way back to the lighthouse.

We spent our afternoon heading deeper into NSW and our stop for the night was the a national park campsite in South West Rocks. We’d opted for stopping at the national park campsite as a cheaper option, parked in the bush, with only a drop toilet for comfort. Luckily for us we had chosen the night a tornado hit Sydney and our entire evening and indeed the night, was blessed with the rain from the outskirts of the storm.

As it had been around 24 hours since we last visited a lighthouse, we got ourselves up nice and early the next morning in order to visit South West Rock’s lighthouse. The building itself was pretty similar to the one in Byron and, much alike it’s counter-part and in fact the vast majority of lighthouse, was perched on a cliff which gave great views of the surrounding coastline. We decided to eat breakfast at the lookout and were entertained by a few kangaroos and their joeys tucking into their morning grass and hanging out in their pouches.

Our next stop were the Trail Bay Gaol Ruins, a Jail set up as an experiment to test more modern ways of rehabilitating prisoners and reintegrating them into society; they were only gently forced into building a breakwater…. which failed before completion. Later on it acted as a concentration camp for more well to do German’s to spend their time during the war. I’m not saying it was a holiday camp but for the time and circumstance, they had it pretty well. Unfortunately people became paranoid they’d eventually be up to no good and the prisoners of war were marched back to normal prisons to be housed! I’ve paraphrased a little but it’s actually quite an interesting history, look it up! After our walk around the ruins we took a walk and dipped our toes in the beach near the remnants of the breakwater.

We had a lunch break further into South West Rocks followed by a paddle in the sea to cool off, before heading to Hat Head, mainly because of it’s cool name, to spend the night in more splendour than the previous one. Of course after a rather busy and long day we spent an hour or so swimming in the creek in order to cool off before, dinner, a shower and much needed bed.

Since then we’ve driven down to the Blue Mountains, just West of Sydney, where we have visited more scenic lookouts and waterfalls than you can shake a Canon DSLR at. We took the time to head over to see The Three Sisters, although after much deliberation I still can’t work out which were the ugly two! Impressively we found a National Trust house to visit, The Everglades, and although the house was nice, I am amazed to discover that there is a international group of National Trusts, called creatively the International National Trust Organisation or INTO.  We were informed that entrance is free with UK National Trust membership, but we don’t have that owing to the fact that we thought subscribing to a NATIONAL Trust would be pointless when just about to leave that nation. Maybe it’s just me.

We spent our morning today at Scenic World, a park which lays claim to the worlds steepest railway, Australia’s tallest cable car and Australia’s biggest cable car (in terms of passenger numbers) and the longest boardwalk in the southern hemisphere. If you’re afraid of heights it  wouldn’t be my first recommendation but the cable cars give great views of the Three Sisters and Orphan Rock and the Railway is pretty impressive. The information of the boardwalks gave a different spin on Fauna and Flora than other boardwalks as well as the history of the Jaimison Valley and the mining that has taken place there over time.

Although the weather has been good to us with the last couple of days in the mid-thirties a storm front is moving in tomorrow for a couple of days so luckily we are heading to Canberra, our stop off for the next week, and of course Christmas, with some of Nicola’s relatives. It’s only a four hour drive a little inland from here now and it’s a little strange to think of the distance we’ve driven the last few weeks.

Peter
A Ginger Down Under
20th December 2015