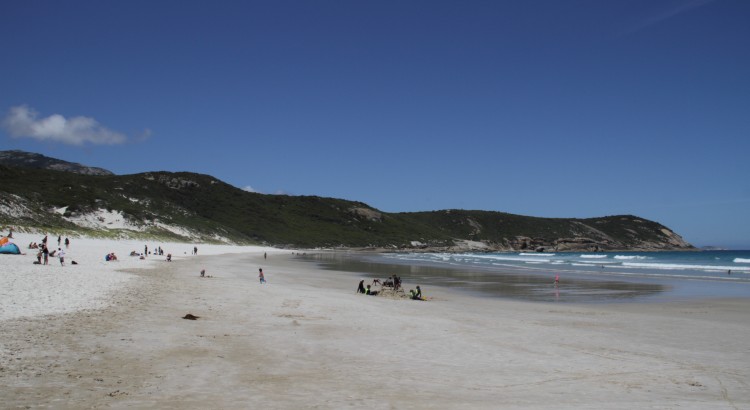 We started our trip towards Melbourne by detouring back to Canberra, to collect Pete’s new phone which had not arrived in time for Christmas, as he had obviously fallen short of making it on the nice list. This meant that much to my Gramps’ surprise, we popped in to visit him and Granny for a quick drink, before heading slightly north so we could easily get back into the city the next day to pick up the phone.

We headed back into the city to pick the phone up from one of my relatives who very kindly kept it for us, we stayed and chatted for a while (and spent time with their dog Daisy) before heading to the shopping centre to find some dinner. We ended up having Thai, which was made a great change after eating relatively bland food for the last what seems like forever and I then persuaded Pete to escort me to the cinema to see Suffragette, which hosted an amazing line up of some of my favourite actors. The film didn’t disappoint and even left Pete a little educated on the suffragette movement. By the time we got out it was dark and chucking it down and we still had to drive for about an hour to the free camp we decided to stay at! The next day we woke up to it still raining so we only briefly saw Bateman’s Bay before making our way to Bega. By the time we had arrived in Bega the news was over saturated with reports of flooding where we had been the night before.

Our drive from New South Wales and through Victoria was a lot less exciting than we had anticipated, with Wilson’s Promontory National Park our only real bit of sightseeing along the way. We stopped off and walked along a lot of beaches, from Norman Beach at the tip of the park, then Squeaky Beach, so named because of the squeaky noise it made when you walked on it, and back up to Darby Beach, before driving through Melbourne which looked awesome from the high motorway bridge heading out of the west side of the city. More importantly I got my first glimpses of the Rod Laver Arena where we would be in two weeks to watch the tennis!

Finally we made it to Adelaide and booked our campsite before heading out to Mount Lofty, as suggested by Jason, which gave awesome views across Adelaide. We even saw our first wild koala as we got out of the car! We then headed back down and around Mount Lofty to Waterfall Gully which was pretty; but we decided against the steep walk to the others as the mid day sun made it a little two hot to go on a hike! We opted for a chilled evening, after a few days of long drives, managed to do some washing and met a lovely couple from the UK, James and Charlotte, who we ended up chatting to for ages and indeed most evenings of our stay over the next few nights.

We were up early to drive to Glenelg where we boarded the Temptation Sailing boat for an afternoon of dolphin spotting, after what seemed like forever, enough time for Pete to have a nap, we finally spotted a small pod of dolphins! We had to rush to get into the water from the back of the boat as dolphins are wild creatures and weren’t going to hang around for us, this took some time as not everyone seemed to understand the hurry, but after a couple of times of getting into the water we managed to be quite close to the beautiful animals and even saw a few week old calf with its mother! That evening we chilled out and watched the fast 4 tennis to get in the mood for Aussie open in a week’s time.

The next part of our journey takes us back to Melbourne for the tennis, via the Great Ocean Road.

Nicola
A Ginger Down Under
11th January 2016